Order in the Court! Manti Te'o

The drama of Manti Te'o is investigated closely. Was this football start just a victim of a terrible internet hoax or is there some truth to this drama? 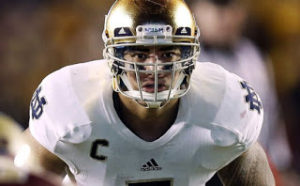 Last night, an article written by Timothy Burke and Jack Dickey caused a national uprise with the emergence of a story no one thought was possible. In September of 2012, Notre Dame’s Senior Captain Linebacker Manti Te’o suffered from the loss of his grandmother, Annette Santiago, then the death of his girlfriend, Lennay Kekua.

One of the NCAA’s top 15 draft picks is now America’s top story: “Manti Te’o’s Dead Girlfriend, The Most Heartbreaking and Inspiration Story of the College Football Season, is a Hoax”. The story was released on January 16th at 4:10 pm on Dead Spin and has surfaced all over the sports marketing world within 2 hours with the help of Social Media Marvels Twitter, Facebook, and Instagram. Te’o was dating this woman by the name of Lennay Kekua, a Stanford Grad, that he met back in 2009, and she passed away from Leukemia hours after his grandmother’s death on September 11, 2012. The inspiration came from his statement saying that “she didn’t want me to go to the funeral because she wanted me to stay here and play the game”. Te’o leads the Irish to victory against Michigan State and Michigan, giving Notre Dame a 4-0 record start for the first time in 10 years. Notre Dame’s head coach Brian Kelly awarded the Game Ball to Manti Te’o in name of Lennay Kekua on Sept. 22, 2012, following the win over Michigan.

As you read the story by Burke and Dickey you will see the truth unravel on Manti Te’o and his so-called girlfriend Lennay Kekua. The story provides proof and evidence through Tweets and Instagram of how Lennay Kekua never died and never met Manti Te’o. Was Te’o just the victim of a horrible internet hoax (like his and Notre Dame’s alleged statements say?) or what Te’o using the death of his girlfriend as a publicity stunt to gain fame? Until the story appeared yesterday, Te’o never said anything about a hoax or that he found out she was not real. ESPN Mike and Mike reports that if these allegations are true, and Te’o was involved in this immoral hoax for publicity, there could be a drop of interest in the draft. How can teams trust a player, A CAPTAIN, and leader of their team, when he is a liar and involved in such deceptive acts. This is definitely a big hit for Te’o (alleged of being a top 15 draft pick) to be bumped to a 6th round pick. With Pro-Day and the Combine around the corner (in March), this was not a story that Te’o would have wanted to be leaked. The uprising of the hoax has caused a new trend on Twitter and Instagram with the creation of the hashtag #TEOING and a growth in popularity with the word #catfish. We will see what happens as the story continues to unfold.

Find the article by Burke and Dickey here and decide for yourself:
Manti Te’o’s Dead Girlfriend: the Most Heartbreaking and Inspirational Story of the College Football Season is a Hoax

Need help with online reputation management? Tandem.Buzz is a full-service digital marketing agency that can help maintain the damage of bad press on the internet. Learn more about our digital marketing services online or contact us today.